Why Getting a Lawyer Is Better Than Temple Pandits for Marriage Registration?

It is best to have a marriage registered in court and follow a traditional route later. Sometimes, depending on an Arya Samaj Pandit for legal processes never works out. So better opt for a Marriage Registrar now onwards. Why? Find out here.
7,558

Marriage is such a wonderful time for everyone, but what if the marriage certificate you hold is fake?

You haven't got one?

Don't you know its compulsory!

Before I elaborate on the forgery issue, it has been observed that still, 60% of couples in India don't get their marriage registered. You don't get penalized for not having one, but it can cause hindrance to you.

If you haven't registered your marriage till now, you are sure to face problems in:

and many other matters. It's best for you to get your marriage registration certificate than feel helpless tomorrow.

Following the law is a good practice, as it keeps you secured for dealing with any later consequences. The recent news of Ghaziabad has brought to notice a new issue, where marriage certificates are being forged.

Of late, the district administration was getting a large number of complaints about couples from other states getting their marriages registered in Ghaziabad in contravention with the UP Marriage Registration Rules.

According to rules, the marriage of a couple can be registered in UP district only if the wedding has taken place within the state’s jurisdiction or at least either of the couple is a state resident.

What was highlighted though was that temple managers of six Arya Samaj temples and trusts located in Kavi Nagar and Vijay Nagar areas were booked for issuing forged marriage certificates to couples.

The secretary of Arya Kendriya Sabha, Narendra Panchal filed a complaint with the district administration. After which, a spot inquiry was conducted by the city magistrate.

Leading the investigation, it was found that six such temples and trusts were found to have no connection with Arya Kendriya Sabha. They did not have any right to solemnise the marriages.

Along with this, the inquiry committee also found that local lawyers were using these forged certificates for registering marriages in the district.

On the basis of a complaint filed by sub-registrar Dayanand Singh, an FIR was registered against the managers of the six temples and trusts at Sihani Gate police station. They were charged under IPC sections:

This all boils down to be safe than being sorry!

To get their marriage registered had the couples in Ghaziabad gone to a licensed Registrar in the court, then the marriage process would have been complete without any hurdles.

Tomorrow, if you have to get married, it’s better that you approach a Registrar first than wait in line later to get a legal stamp on your relation. 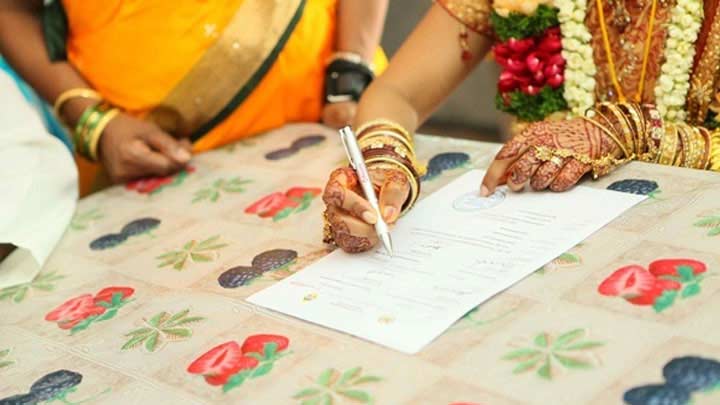 In India, the procedure for marriage registration is common for all states. There is no separate law but based on religious beliefs rather.

Procedure to apply marriage certificate in India, under the Hindu Marriage Act is:

Documents Required for the same include: All documents must be self-attested.

To follow this through properly, you might need a family lawyer who can assist and guide you well, along with cutting down on the time and efforts it might take you otherwise.

For which you can approach MyAdvo and we’ll offer you with a list of lawyers on our portal with whom you can connect.

MyAdvo is a legal-tech platform ready to serve you with all your legal needs and educate you on all legal terms through its blogs and news section.

Just connect with MyAdvo via mail at consult@myadvo.in and you can express all your legal concerns that we’ll take care of.

After all one never knows who might need help.

We love to hear what all you have to say. So, don’t forget to comment below!