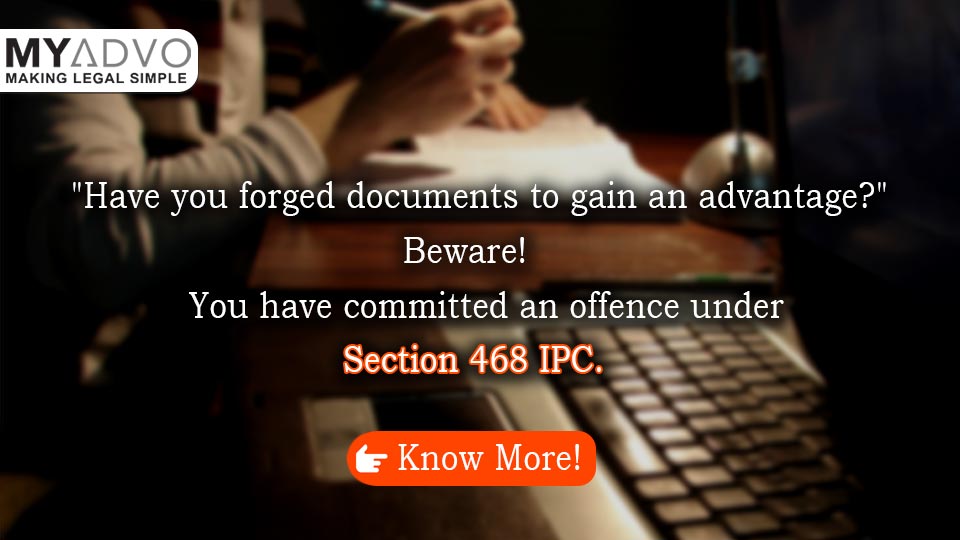 Section 468 - Forgery for purpose of Cheating

Section 468 IPC defines the offence of Forgery that has been committed with the intention of cheating a person.

Sec 468 IPC, as defined in the code reads as, “Whoever commits forgery, intending that the document or electronic record forged shall be used for the purpose of cheating, shall be punished with imprisonment of either description for a term which may extend to seven years, and shall also be liable to fine.”

We all must have heard a lot of the term ‘forgery’. Somebody says, he was forged by a person and so on. The offence of forgery is defined under section 463 of IPC.

Forgery simply means, the act of making a false document or any false electronic record in order that it may be used as genuine. Also, one of the essential ingredients of forgery is that it is committed with the intention to defraud or deceive a person.

For the purpose of section 468 Indian Penal Code, the words ‘document forged’, the words “document or electronic record forged” has been substituted by the Act 21 of 2000.

To attract the provisions of sec 468 Indian Penal Code, forgery must be committed with the intention that the document or an electronic record shall be used for the purpose of cheating.

To establish the offence of forgery for the purpose of cheating, the presence of following ingredients is a must. These elements are :

There is a landmark case based on the provisions of IPC 468. The case names as “Dr Vimla vs. Delhi Administration”. The brief facts of the case are, - Dr Vimla bought a power car on the name of her minor daughter and transferred the policy to her daughter’s name.

Later, the car met with two subsequent accidents and Dr.Vimla filed two consecutive claims against the insurance policy. Dr Vimla signed the claim papers as Nalini (her daughter) and acknowledged the receipts as well.

It was held by the Supreme Court that, the accused Vimla was not guilty of the offence under section 468 IPC. It was so because the said deceit neither secured to her the advantage of the claim amount, nor the insurance company faced any kind of economic loss.

For holding a person guilty under the ambit of this section, it is to be proved that he has made a wrongful gain by deceiving the person or other entity. It is necessary that some kind of advantage is enjoyed by the person deceiving other.

The offence under this section does not require that the accused should actually commit the offence of cheating, what matters here is the intention or we can also say the purpose of the person committing such an act of forgery.

The offence committed under this section is cognizable, non-bailable and triable by a Magistrate of the first class. The term of punishment includes imprisonment which may also be extended to 7 years, or with fine or with both, depending on the matter.