Is Stun Gun Legal in India as the Air Gun?

Outside everyone knows how to use a stun gun for self-defense. Reason being that stun gun is legally allowed there. But in India, only police officials have permission to use and carry a stun gun. India however, holds a different legal ground for air gun, let us understand why and how. Read the blog to know all about stun guns, legality of air gun, India legal perspective on stun gun and more.
Written by:
Prachi Darji
13,816
Published on
29-Mar-19

You may already know that carrying any kind of weapon is illegal in India, however, what is a weapon?

Well, a weapon is a thing that inflicts bodily harm or physical damage. Both in the context to attack someone or in the act of self-defense.

This means unless the intent of the person is of self-defense, using any weapon, including pepper spray also, can land you in jail.

So what do you think will be the legal status of owning a stun gun in India?

In many countries, owning a taser or stun gun isn't illegal, as it can be used for the purpose of self-defense. Stun Gun, however, is an electroshock weapon.

If you still need to talk about the legal aspects of carrying and using a stun gun or air gun, all you need to do is talk to a lawyer, from whom you can ask any legal advice regarding the law. You can avail lawyer with the help of MyAdvo!

What are Stun Guns & Air Guns?

According to Merriam-Webster Dictionary, a stun gun is a weapon to stun or immobilize (as by electric shock) rather than kill or injure the one affected. It is a device that can immobilize a person or animal for a short time without causing them serious injury in Collins Dictionary. So from the definitions, we can gather that a stun gun is a device or weapon which immobilizes an attacker without causing any serious hurt from inflicting injury to another person. Such devices are very helpful in cases of self-defense.

According to the Cambridge Dictionary, an air gun is a gun that uses air pressure to fire a pellet. It will not kill a person but will cause serious hurt and injury to the person at whom the air gun has been fired. An air gun is a weapon that causes injury to another to keep him weak and non-threatening. The air gun is another device which is as useful as a stun gun but more deadly in comparison to the stun guns.

Legal Status of Stun Guns & how to use a stun gun for self-defense?

Stun guns are devices in use for self-defense rather than as a weapon for causing serious injury. They are very helpful when you feel threatened or apprehend serious injury in dire circumstances.

Stun guns generally help in stopping the attacker from causing hurt or injury. Giving you enough time to save yourself either by running or to call the police.

With the help of this, you are able to save yourself and don't need to kill your attacker.

But, not everywhere are stun gun legal.

Now, whether or not is a stun gun legal in your country depends on the law you follow.

So, is stun gun legal in India?

However, to know whether stun gun is legal in India, it is to be noted that laws and rules for using a stun gun are regularised under the Indian Arms Act.

Since stun guns, rules and regulations are monitored and regulated by the Indian Arms Act. Therefore, under this Act, only police officers have permission to use a stun gun and not to the general public yet.

The law is such because, if the general public gets the permission to use and carry a stun gun, then people might use it for serving their own selfish needs, instead of using it for the betterment of the society.

Using a stun gun without proper permission and legal documents will attract penalty and such acts are illegal and count as an offence.

Thus, to keep a check on the use of the stun gun, the law has limited its usage to police officers only.

However, if one sells stun guns in places where there is a ban on the usage, then the person selling and buying will be liable to punishment with heavy fine and imprisonment. 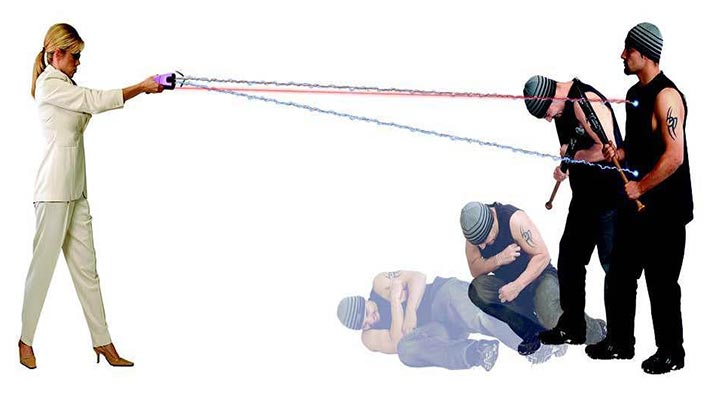 How to use a stun gun for self-defense?

To survive a situation, self-defense is very important.

And in the process, if you have no way out but to use a weapon to kill the attacker, in order to protect yourself, even the court allows you under section 304 IPC.

Therefore, by using a non-lethal self-defense weapon, like a stun gun, is an effective way to protect your family and yourself against an aggressor, without inflicting grievous hurt or injury.

Before you know how do you use the stun gun, you should know how it works.

Stun Gun is one of the most popular and effective self-defense weapons today.

So, when you shoot the attacker with a stun gun, all he/she will feel an electric shock running through their body, which will immobilize him/her and disable them from attacking you.

The stun gun works by stopping the electric pulses from the attacker's brain through electric shock produced from the gun. Thereby, stopping all physical functions for a short period of time.

Since it's a type of non-lethal self-defense weapon using powerful voltage of electricity to stop and temporarily paralyze an assailant. You are then able to neutralize any type of target without the risk of killing him/her.

This is something you should know before buying a stun gun online. India, however, doesn't permit you to have it in your possession, but with a proper license.

It is very important to learn how to use a stun gun effectively before using it, following are the steps:

You should always remember to use the safety button of your stun gun to avoid unnecessary accidents.

There are times when stun gun owners accidentally shock themselves when reaching for their gun from pockets or bags/purses.

The lock is also a good safety feature to protect children from your group or family from electrocuted.

Keep from touching the probes in your stun gun. Always handle the gun on the switch and security plate area to avoid shocking yourself.

Remember to only press the button when engaging a target. It sends out powerful electric current until you release the switch so don’t press it if you’re just playing around.

Remember to hit the target first before pressing the button to deliver an electric shock. Never be afraid to use too much voltage because it will not kill the attacker. It is better to be safe than sorry. 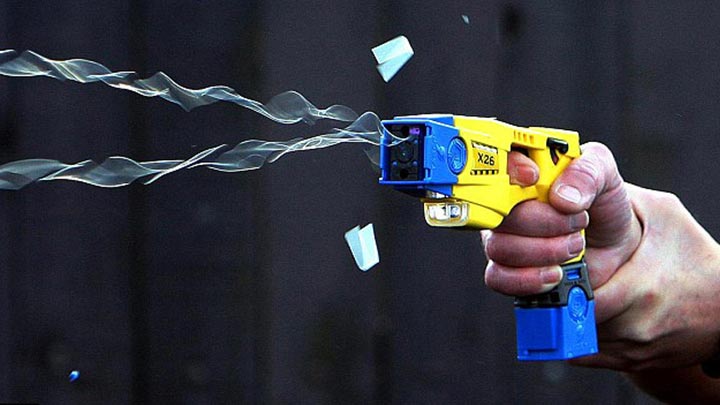 Why and how are air guns legal in India?

Whether or not is importing air gun legal in India? You’ll find the answer below.

Generally, one uses an air gun in matters of self-defense. Especially people who have to work or travel to distant places at night. An air gun is a perfect device to install fear in the minds of the attacker. And if fired it gives enough time to call for help or police.

Why are air guns legal in India?

Using and carrying an air gun is legal in India because it does not cause grievous or fatal injury like a pistol but at the same time, it has a capacity to disarm a person from causing any threat or danger to another person?

Use of an air gun in India is legal but it also comes with certain restrictions and rules. You need to have a license to keep or carry an air gun with you.

Air guns have found use in competitive sports or hunting small animals as well. It has found its use in pest control and recreational shooting purposes.

Obtaining a license to carry an air gun is not enough; a person should also know how to use it and the rules which make use of air gun legal in India.

Indians have permission to use and carry an air gun only if they follow all the rules and guidelines. These are mandatory to follow while using an air gun.

What are the advantages & disadvantages associated with Stun Guns?

Advantages of a Stun Gun:

From the above discussion, it is clear that stun gun is quite useful when it comes to self-defense or to help oneself from immediate danger or attack. Most of the countries have understood the importance of carrying a stun gun. Thus, they have legalised carrying and using a stun gun. But that does not mean it can be used anytime. One has to make sure of the restrictions in your country and make use of it in serious situations. A stun gun is for both the general public and police officers.

Disadvantage of a stun gun:

If you don't use a stun gun properly then the result will turn out to be different. Since using a stun gun won't cause any grievous hurt, but you can use it when anyone threatens or harms women or aged people.

What is a stun gun is finally clear from the above discussion along with its usefulness? Since only a police officer has the permission to use it and no ordinary citizen or civilian. Therefore, if anyone uses or carries a stun gun, without proper permission, then it’s illegal and will attract penalty. 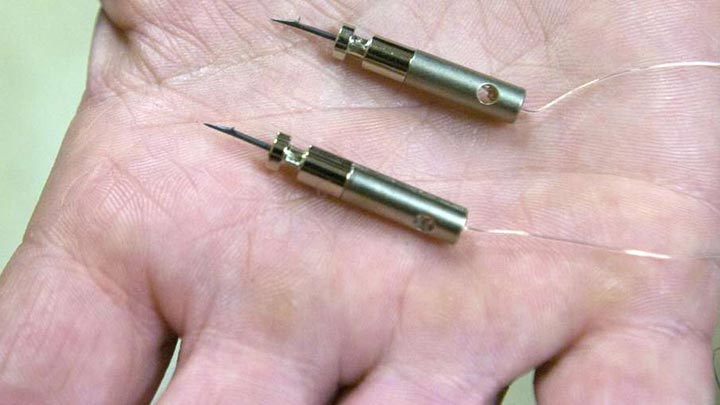 Who to ask for help?

So if you ever need clarity on the legal aspects dealing with stun guns then, let MyAdvo help you! You can find lawyers near you with just one click of a button.

As MyAdvo provides you with the finest legal minds of the industry from over 10,000 lawyers across 500+ districts, right at your screen.

With MyAdvo you get access to great legal minds, who are experts in their field. All you have to do is just select one that matches your criteria.

Just express your query via mail on support@myadvo.in or simply call us at +91-9811782573 to resolve any and every kind of legal problems.

Cyber Crime Complaint is the first step in the protection against any Cyber Crime. India over the period of time has established many cyber cell that have reported an increasing number. Find out the ways here in which you can tackle cybercrime.
Swati Shalini
12-Sep-19
275,716 views

Cyber laws in India protect a person against the abuse of technology. The role of law in the cyber world is to provide legal recognition to all electronic activities and records. Cybercrime Act in India gives a framework verifying e-filing and e-signature of documents.
Swati Shalini
13-Sep-19
194,311 views

Cyberbullying is an offence of online bullying whereby a person with the use of technology through digital devices threatens, embarrass, harass another person. Cyberbullying in India is an offence in India which is creating a lot of hue and cry in today's word and there is no specific legislation to deal with cyberbullying laws in India.
Swati Shalini
28-Sep-19
124,456 views