File a Suit for Specific Performance

For more adept legal help or information regarding suits or legal notices for specific performance, connect to us for an expert legal consultation.

Specific Relief Act, 1963 was codified in India which deals with the remedies granted by the court at its discretion for the enforcement of individual civil rights. In case of breach of contract, generally the remedy given by the court is compensation or damage of the amount of loss suffered by the party.

For this, the party files a suit in the court of law. But, sometimes compensation doesn’t satisfy the plaintiff, so he may also ask for a specific performance relief.

What is a Contract?

A Contract is a written or verbal agreement that is legally enforceable in a court of law. Two or more parties enter into this for a particular purpose where both the parties assume a legal obligation that must be satisfied.

Yes, Specific Performance is a cause of Action. This is because, if a person is not able to perform as per his promises in a contract, then that will lead to a cause of action and the other party can file a suit against it in the court. The court will ask the defaulting party to perform that promise.

What is the difference between Specific Performance and an Injunction?

Both of them are remedies for a cause of action, but there is a difference in both of them. Specific Performance as a remedy is given by the court when the innocent party asks for it. The breaching party will do things as per their original requirements.

The court usually gives this when it thinks that a monetary compensation would not serve the party adequately. It is very common in sales contract, and is used when there is a contract involving the sale of something very unique, like a particular tract of land, a very rare heirloom, or any invaluable art work.

For Example: Ram is an art dealer. He acquires an ancient Dutch statue that he thinks belongs to Rob Voerman. Mohan makes an offer to buy this art. Two of them make a valid legal contract. Ram later decides to keep the statue for now. Mohan sues Ram for breach of contract.

The court decides that the statue is priceless and Mohan cannot acquire another comparable piece no matter how much money is paid by Ram as compensation. Therefore the court decides that Ram should comply with the terms of the contract, and sell the statue to Mohan for the price agreed between the two. This is called specific performance.

Injunction, on the other hand is a remedy that prohibits a party to do a particular act. So that basic difference between specific performance and injunction is that, specific performance orders a party to do something, and an injunction orders a party to refrain from doing something. The court usually orders it when the intention is to preserve the status quo in situations where any further act of any type would cause one party irreparable damage. There are two types of injunction; (i) Temporary injunction, and (ii) Permanent Injunction.

Can a Plaintiff Claim for Specific Performance and Permanent Injunction in the Same Suit?

In a case decided by the Supreme Court of India, it was held that plaintiff cannot claim reliefs of specific performance and permanent injunction in the same suit. The court gave the reason that the cause of action to claim relief of permanent injunction and specific performance are independent of each other, and one cannot claim both of them in the same suit.

When can you sue for specific performance?

Who can sue for specific performance?

What happens when a seller breaches a Contract?

In both the situations, the buyer and the seller should look carefully for relevant clauses in the contract. See for any conditions in which one of the parties can deny from making performance. If something happens or not happens, like grant of loan by the bank. There may be other conditions like, if the buyer’s condition does not satisfy the seller. Then he/she can revoke the contract later.

The buyer in the breach have different recourse, he/she can either take money damages, and can also claim for the refund of any deposits, other expenses etc. Also the buyer can compel the erring party to go ahead with the contract under specific performance.

A sale is incomplete till the buyer has made the full payment and the seller delivers the property to the buyer. It may also happen that the buyer steps backwards from the contract by not making the payment. In this case, the seller can also seek specific performance before the court.

Before coming to the conclusion that a seller can sue for specific, some conditions of the contract should be carefully checked. Like, the presence of an arbitration clause where arbitration shall be the method of dispute resolution. If there occurs any conflict or breach of contract. 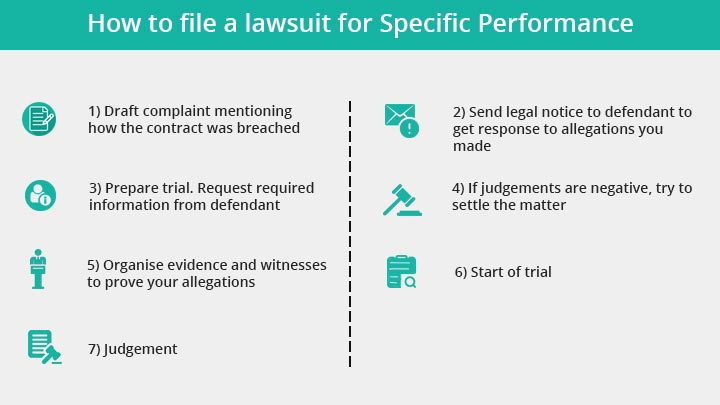 How do I file a lawsuit for Specific Performance?

Filing a lawsuit for specific performance involves many steps:

For more queries or confusion regarding legal notices or suits for specific performance, ask for expert legal advice from us now!

In order to not miss out on any information or compliance and to avoid delay in filing suit for specific performance, it is recommended to get in touch with a lawyer who is well- versed with such technicalities and knows the ground realities of it.

Consulting a lawyer will make the whole process hassle-free and smooth. This is where MyAdvo comes in, with its expertise lawyers. We will help you find a lawyer online all over India.

As per the Constitution of India, there are 11 Fundamental Duties of Indian Citizens which are non-enforceable in the court of law. These fundamental duties of India are added to promote unity & harmony in the country.
Prachi Darji
13-Sep-19
1,074,751 views

Writ Petition is an order given by the High Court to a lower court directing them to act or stop acting in a certain way. The article talks about Writ Petition, the types of writ petition, how to file a writ petition in court and the format of each writ.
Prachi Darji
29-Sep-19
564,863 views

Prostitution in India is legal under the Immoral Traffic Act but its related activities such as owning a brothel, child prostitution, etc have made it illegal.
Prachi Darji
12-Sep-19
488,553 views