Patent filing in India is governed by the Patents Act (1970) & Patent Rules (1972). Know the kinds of inventions that are patentable, the procedure of filing patents and how to check the availability of your patent search online in India.
Written by:
Prachi Darji
4,407
Published on
24-May-19

Which Inventions are Patentable?

Not all innovations are “inventions” within the definition of the Patents Act. The term “invention” is defined under Section 2(1) (j) of the Patents Act as “a new product or process involving an inventive step and capable of industrial application”. 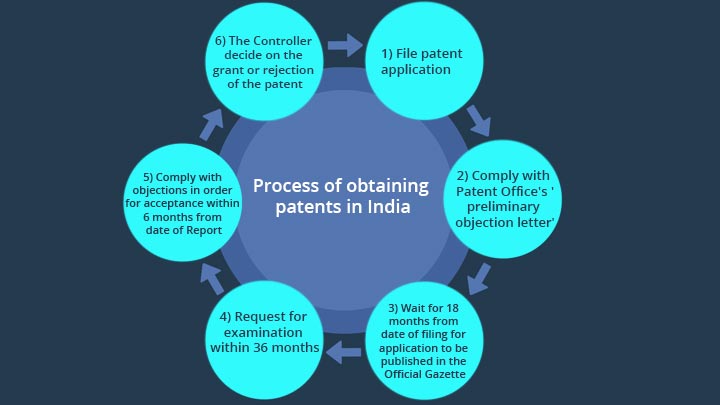 Inventions that are ‘not’ Inventions

Section 3 of the Patents Act enlists the innovations that are not classified as “inventions” within the meaning of the Act, like a method of agriculture or horticulture; mere discovery of any new property/known substance/known process, an invention which is frivolous or claims anything contrary to the established laws etc. By the Second Amendment, there have been a lot of additions to the list for example, a mathematical or business method, topography of integrated circuits etc.

Who can be an Applicant of filing a Patent?

It is on a first-to-apply basis. The application can be made either by the inventor or the assignee or legal representative of the inventor. Foreign applicants are given national treatment.

There are seven types of applications that may be filed in the Indian Patent Office:

The procedure for filing and obtaining patents in India is as below:

Every patent granted under the Act shall be dated as of the date on which the complete specification was filed. The Second Amendment prescribed a uniform term of 20 years (there is no provision for extension) from the date of filing the patent application in India for all categories of patents in compliance with Article 33 of TRIPS.

Cost of filing a patent application

The cost of filing a patent application for an individual is INR 1750/- and request for examination is INR 4400; whereas for online filing it is INR 1600/- and INR 4000/- respectively (digital signature is must).

Can a Patent be surrendered?

Yes, at any time by giving a notice to the Controller in the prescribed manner a patent can be surrendered.

Assignment/Mortgage/License of Patent, whether possible?

Yes, only if specified conditions listed under the Act are satisfied.

How can a Patent be cancelled or revoked?

Either the Intellectual Property Appellate Board (IPAB) by way of a revocation application or the High Court by way of a counterclaim in a suit for infringement of the patent.

How do you check if your idea is already patented?

The Indian Patent Advanced Search System, InPASS, was introduced on 27.02.2015. Prior to InPASS, IPAIRS [Indian Patent Information Retrieval System] was used to conduct patent search in India. Below are the steps:

First, you will have to collect the keywords relevant to your invention or patent. The keyword search can only be used in the search parameters – title, abstract, claims, and description. The patent search can be performed using the keywords along with 'Boolean Operators' and/or 'Wild Cards'. The search results will show in two columns. In the left column, the application number/patent number, title, application date and status will display. Based on the selection of a row in the left column, details [Bibliographic Data, Specification, and Status] of the patent application/granted patent will display in the right column. Further, you can view the details of Bibliographic data, patent specifications, and application/patent status in the respective tab.

The Indian patent search database also allows you to search for patent applications/patents by entering the name of the applicant against the relevant row.

Similar to the applicant name search, you can also search the inventor name in the relevant row and the result display.

In addition to the above searches, you can also perform various search queries to retrieve the results based on your requirements.

Copyright is one of the Intellectual Property Rights granted to literary, musical, or original works of art. Read on to know how to send a legal notice and how to avoid copyright infringement.
Prachi Darji
28-Sep-19
53,299 views