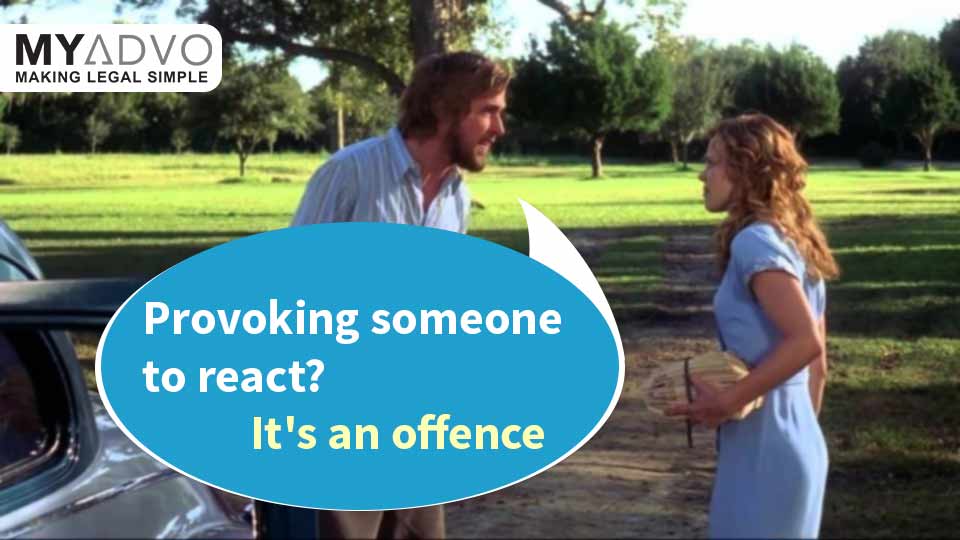 Section 504 IPC as defined in the code provides punishment to, “whoever intentionally insults, and thereby gives provocation to any person, intending or knowing it to be likely that such provocation will cause him to break the public peace, or to commit any other offence, shall be punished with imprisonment of either description for a term which may extend to two years, or with fine, or with both”.

For a better understanding of sec 504 IPC, it is necessary to know what does the term ‘insult’ actually mean and how it become severe in nature that can even make a person liable for committing a criminal offence.

The objective of 504 IPC section is to prevent the intentional use of abusive language amounting to insult, giving rise to provocations causing the person against whom such words are used to commit breach of peace. In this section, it is showed how a person can provoke another to commit an offence that is criminal in nature and which can also harm the public peace at large.

In our daily lives also, we hear a lot of words that are offensive in nature but somehow ignore to manage them, but in cases, if a person intentionally uses abusive or offensive words in order to humiliate a person or provoke him, he is said to commit an offence under the purview of sec. 504 Indian Penal Code. In order to establish an offence under this section, the following ingredients must be proved:

To commit an offence under this section, insult is necessary. The term ‘insult’ means that the words used must be of such a nature that causes contempt to the dignity of a person or we can say, which causes a sense of humiliation to the person. These words even include the daily slangs people use in their daily lives as well such as- bastard, foolish and so on.

So, the answer to this question is, an intention of insult is a matter of facts and circumstances which differs from case to case and situation to situation. Nature of insult is more of a question of fact and not of law. Insult caused should give provocation to cause a breach of public peace.

Say for an example- when the accused abused the complainant in such a manner which involves the chastity of his mother or sister, such an act falls under the ambit of IPC section 504. This was also held in the case of In re Karumuri Venkatratnam.

By reason of the expression of the abusive words in the background, atmosphere, and circumstances in which they are used, the act shows the breach of peace, which is considered as the determining test to bring a case within the extent of section 504 IPC.

Further, it is also contended that every insult could not be classified as an intentional insult. Say for an instance, a mere lack of good manners and casual talks between friends does not constitute an offence under this section. In the same manner, use of abusive language not supported by intention also does not lead to a breach of peace and does not make it an offence.

Each case of abusive language is to be decided on the facts and circumstances of that case, and there cannot be a general proposition that no one commits an offence under section 504 IPC if he merely uses abusive language against the complainant

Hence, the abuse that attracts section 504 IPC, must be accompanied with an intention to provoke a person intending or knowing it to be likely that such provocation will cause the latter to break the public peace, or commit some other offence.

The punishment provided in the code for committing the offence under this section is imprisonment for 2 years or fine, or may include both. It is a non-cognizable as well as a bailable offence, triable by any Magistrate.