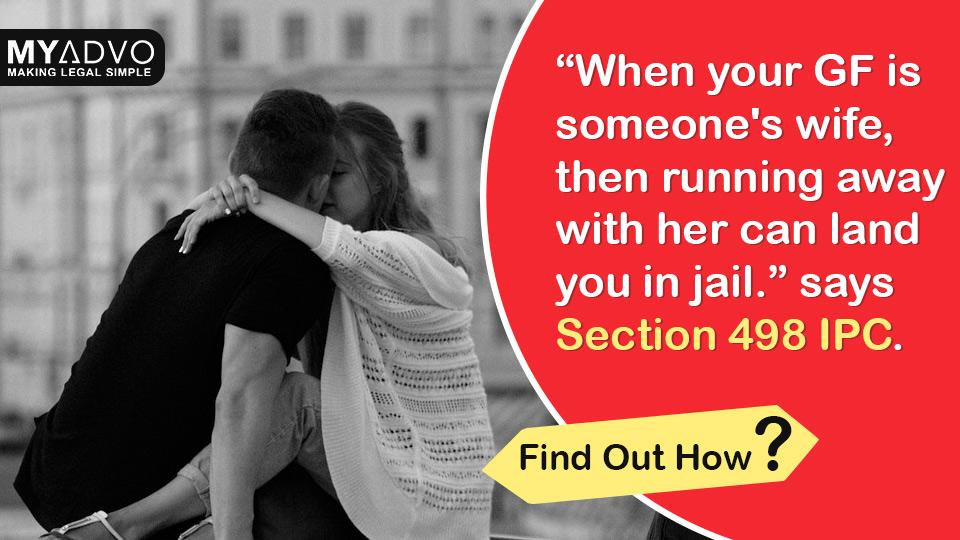 Section 498 - Enticing or taking away or detaining with criminal intent a married woman.

Section 498 IPC as stated under the code reads as, “Whoever takes or entices away any woman who is and whom he knows or has reasons to believe to be the wife of any other man, from that man, or from any other person having the care of her on behalf of that man, with intent that she may have illicit intercourse with any person, or conceals or detains with that intent any such woman, shall be punished with imprisonment of either description for a term which may extend to two years, or with fine, or with both”.

Sec 498 IPC deals with the offence of criminal elopement. The provisions of IPC section 498 are intended to protect the rights of the husband. The section requires some of the following essential ingredients:

The word ‘takes’ here connotes the personal or active assistance of the accused to the wife in getting her away from the husband’s protection, or from any person, who was taking care of her in the absence of her husband.

Whereas the term ‘enticement’ used in section 498 of the Indian Penal Code refers to some kind of persuasion. Before holding a person guilty, it must be proved that the enticement of the wife of another was from the control of her husband.

The section is divided into four parts. It says that a woman may be :

In the first three class of cases, the consent of the woman would not matter if it is shown that the said consent is induced or encouraged by the offender by words or by committing any other act.

Since the object of this section is to protect the rights of the husband, it cannot be any defence to the charge to say that, though the husband has been deprived of his rights, the wife is willing to injure the said rights and the person responsible for her willingness has not detained her.

Further, if a woman is taken away with the consent of the person who was taking care of her, on her husband’s behalf, does not come within the meaning of enticing away under Sec 498 Indian Penal Code.

In such cases, no court can take the cognizance of the offence except if the complaint is made by the husband or the person who was taking care of her.
Marriage is one of the essential ingredients of this section. The fact that the woman is married and her existing marriage should be strictly proved.

Sometimes, the provisions of IPC 498 are confused with section 366 of IPC. Section 366 IPC is intended to protect the woman from abduction or kidnapping, where she is compelled to marry or have illicit intercourse with a person against her will.
Whereas, IPC section 498 intends to protect the rights of the husband.

The act committed under section 498 IPC is a criminal offence, punishment is imprisonment for a term of 2 years, or with fine, or it could be both, depending on the facts and circumstances of the matter.
It is non-cognizable, bailable offence triable by any Magistrate.