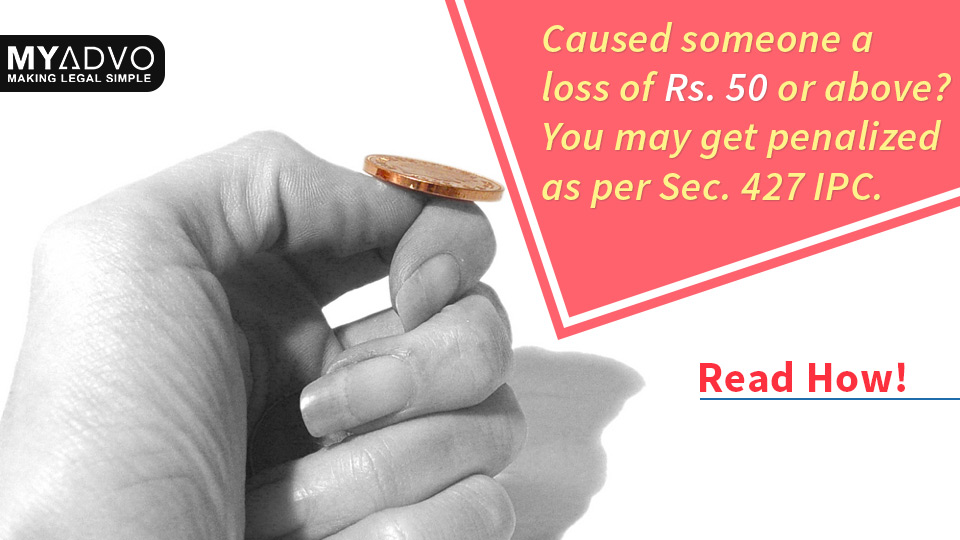 Section 427- Mischief causing damage to the amount of fifty rupees

Section 427 IPC deals with, “whoever commits mischief and thereby causes loss or damage to the amount of fifty rupees or upwards, shall be punished with imprisonment of either description for a term which may extend to two years, or with fine, or with both.”

For a brief understanding of sec 427 IPC, firstly, it is to be understood that what does the term ‘Mischief’ mean?
Mischief is committed when a person knowingly or intentionally causes the loss of another person. The damage caused is of a nature that diminishes the value of the property or any other valuable thing.

As per the penal provisions, Mischief is a criminal offence, defined under section 425 IPC.
Instead of dealing with mischief in general terms, there are 14 cases mentioned in the Code defining the different ways in which the mischief can be committed and the loss suffered by a person.

IPC Section 427 deals with the situation, where the loss suffered by the person is of 50 rupees or more than that. For the offence of mischief, it is not essential that the offender shall intend to cause loss or damage to the owner of the property that has been injured or destroyed.
Mere the fact that he intends to do so, or he knows that he is likely to cause the wrongful loss to a person, is sufficient to hold a person guilty under the purview of section 427 of the Indian Penal Code.

The only distinction between the two sections is the extent of the damage done by the mischief. The term of punishment also differs on the basis of that only. IPC 427 applies when the damage caused by the act of mischief is to the amount of fifty rupees or more than that.

To hold a person guilty for committing the offence of mischief, it must be proved:

For a better understanding of section, we can take the help of a few examples-

Any person, who commits the offence of mischief under section 427 IPC, is punishable with imprisonment for a term of 2 years, or fine, or with both. The offence committed under this section is a non-cognizable and bailable offence, triable by any magistrate.