The Nuclear Shield Is Complete & in Compliance with the UN Policy

If you look into the history, India has never lost a war as well as, India has never initiated a declaration of war. Being one of the "strongest nuclear warhead" countries, India has taken a notable step of launching the INS Arihant & completed the Nuclear Triad for the defence of the country. Anyhow India has complied with the UN Policy to keep a peaceful front.
3,057

With Modi declaring on 5th November 2018, about the historic completion of the successful establishment of the Nuclear Triad, as India’s pride, nuclear submarine INS Arihant successfully completed its first deterrence patrol!

However, the Arihant patrol happens to be the foremost step subjecting the operational credibility of the submarine, therefore, a classical triad in nuclear deterrence is an amalgamation of a complex and stringent distillate of three different strands.

While the Prime Minister took to Twitter for announcing the grand success, there are few things that hit our minds as well. 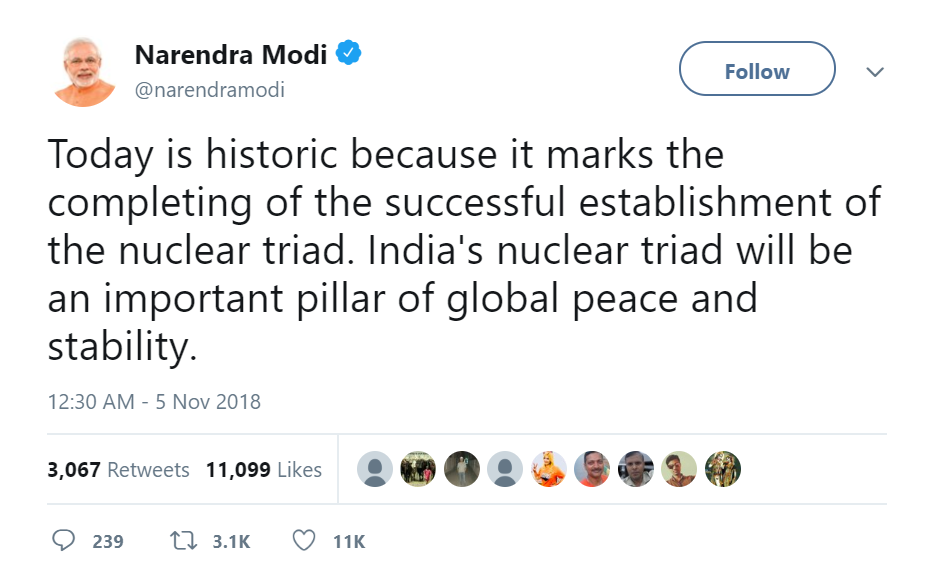 As India maintains a declared NFU posture, in its 1999 draft nuclear doctrine India signed that “it will not be the first to initiate a nuclear strike, but will respond with punitive retaliation should deterrence fail.”

However, India has left some exceptions to remain for chemical and biological weapons attacks. To sum it up, India’s final nuclear doctrine was officially released in 2003 which states, “In the event of a major attack against India or Indian forces anywhere, by biological or chemical weapons, India will retain the option of retaliating with nuclear weapons.”

The doctrine signed by India mentions the following in its draft, where India is supposed to be a minimum nuclear deterrent, which however has not been approved. The doctrine draft elaborates on: Understanding the nitty-gritty behind the successful completion of INS Arihant’s deterrence patrol, it ensures that India's nuclear shield is now complete. If tomorrow, a war descends, India is ready by all means to defend itself through land, air and sea to fight the enemies.

All you need to Know about INS Arihant:

India has been calling it a major achievement for the country, as Prime Minister Narendra Modi said,

“INS Arihant will help in protecting the country from external threats and contribute to the atmosphere of peace in the region. In an era such as this, a credible nuclear deterrence is the need of the hour. The success of INS Arihant gives a fitting response to those who indulge in nuclear blackmail.”

Well, this may be a great news for the nation to complete its defence, yet India still needs to follow the doctrine and ascertain its place under nuclear protection.

However, another news has been doing the rounds, where, Pakistan on 8th November 2018, expressed concerns over the recent deployment of India's nuclear submarine INS Arihant.

"This development marks the first actual deployment of ready-to-fire nuclear warheads in South Asia which is a matter of concern not only for the Indian Ocean littoral states but also for the international community at large," Pakistan's Foreign Office spokesperson Mohammad Faisal said.

The spokesperson said, "The 'bellicose' language employed by the top Indian leadership highlights the threats to strategic stability in South Asia and raises questions about responsible nuclear stewardship in India."

Let us know what you think about it?
Mention your views in the comments section below.
If you liked our take on it, make sure to give it a thumbs up & share forward!