Under GST, transporters should carry an e-Way Bill when moving goods from one place to another.The Transportation of goods of more than Rs. 50,000 (Single Invoice/bill/delivery challan) in value in a vehicle cannot be made by a registered person without an E-Way Bill from 1st April 2018. E-way bill will ensure that unaccounted/non-tax paid goods are disallowed and restricted from moving easily.
Written by:
Antim Amlan
1,452
Published on
17-Jun-19

As the name suggests, an e-Way Bill is an online bill that is used for supply of goods under GST. It l is a document required to be carried by a person in charge of the conveyance carrying any consignment of goods of value exceeding fifty thousand rupees as mandated by the Government in terms of Section 68 of the Goods and Services Tax Act. It is generated from the GST Common Portal for e-Way bill system by the registered persons or transporters who cause movement of goods of consignment.

E-way bill will need to be issued before goods are dispatched and it would be important to carry E-way bill for the goods in transit as an authorised officer can intercept the conveyance/trucks to verify e-way bill. The Transportation of goods of more than Rs. 50,000 (Single Invoice/bill/delivery challan) in value in a vehicle cannot be made by a registered person without an e-Way bill from 1st April 2018. E-way bill can be generated or cancelled through the e-Way Bill, website, SMS, Android App, and by Site-to-Site Integration (through API).

When an e-Way bill is generated, a unique e-Way Bill Number (EBN) is allocated for each consignment and is available to the supplier, recipient, and the transporter. The validity of this EBN depends on the distance of transportation of goods.

What is the e-way bill in GST?

E-Way Bill is the short form of Electronic Way Bill which is totally different from the GST Audit. It is a unique document/bill, which is electronically generated for the specific consignment/movement of goods from one place to another -- either interstate or intrastate, with a  value of more than INR 50,000 -- required under the current GST regime.

The E-Way Bill replaces the Way Bill, which was a physical document, and existed during the VAT regime for the movement of goods.

When should e-Way Bill be issued?

If a registered person is transporting goods as consignor or as recipients of goods i.e. consignee through own conveyance, hired conveyance, railways, by air or vessel, then the said person must generate E-way bill in FORM GST EWB-01 electronically after furnishing detail in Part B of FORM GST EWB-01.

Where goods are transported by railways or by air or by vessel, consignor or the recipient of the supply as consignee shall furnish information in Part A of FORM GST EWB-01.

Where Consignor and Consignee have not generated FORM GST EWB-01 and movement of goods is more than 50,000, transporter shall generate FORM GST EWB-01 on the basis of invoice or bill of supply or delivery challan.

E-Way bill can be generated at the option of transporter or registered person even if value of consignment is less than 50,000.

Where Movement of goods is made by unregistered person through his own conveyance, hired conveyance or through transporter then either by such person or the transporter at their option generate E-Way Bill in FORM GST EWB-01. However, if the recipient is a registered person, then the recipient will have to do all the compliances as if he is supplier. [Explanation 1 of Rule 138]

Who should generate an e-way bill? 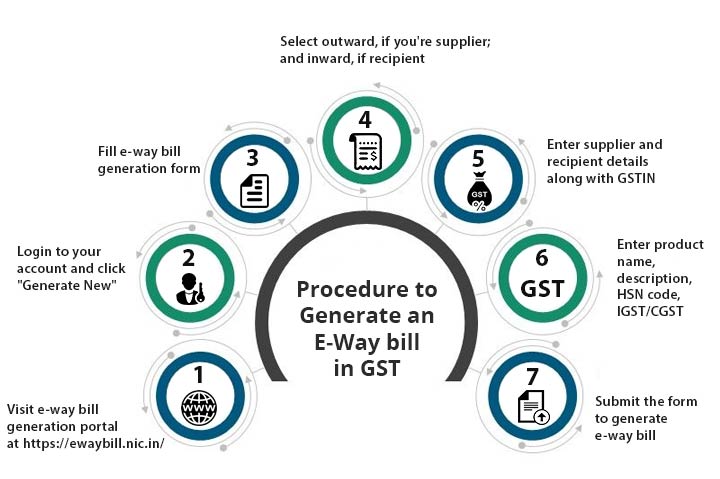 How to generate an e-way bill in GST

E-Way Bills are generated either via online e-way bill system or SMS. The bill needs to be generated before the start of the movement of goods about supply/reasons other than supply/ inward supply from an unregistered person.

Also, you can generate E-way bill on the GST e-Way Portal. To use the portal, you will need a GST registration and transporter registration.

Step 1: Access the e-way bill generation portal at https://ewaybill.nic.in/ and enter the login details to enter the platform.

Step 2: Click on the “Generate New” option from the e-Way bill Main menu page to generate a new e-Way bill.

When a registered GSTIN is entered in the field provided in the form, other details get pulled into the empty fields. Before proceeding to the next step kindly check the details.

Step 4: The second half of the page will contain information to be filled as follows:

Step 5: Click on the “SUBMIT” button to generate the e-way Bill. The e-way bill gets displayed which contains the e-way Bill number and the QR Code that contains all the details in the digital format. The printed copy of the bill should be provided to the transporter who will carry it throughout the trip till it is being handed over to the consignee.

What is consolidated e waybill and how do you generate it?

Consolidated EWB is like a trip sheet and contains details of different EWBs in respect to various consignments being transported in one vehicle. These EWBs will have different validity periods.

You can generate consolidated E-Way bill in FORM GST EWB-02 before movement of goods. A consolidated e-Way bill can be created containing all the details on the transaction and is also easy to generate it by providing just the ‘e-Way bill number’ in the required field.

Related Read: Goods and Services Tax: Its Types and Impact

What happens if E-Way Bill is generated but goods are not transported?

In case the e-Way Bill is generated but the goods have not yet been transported to the destination, then the bill needs to be cancelled. It can either be cancelled electronically via the GST website or through a GST Facilitation Centre within 24 hours of generation of the bill. If any officer has already verified the bill during transit, then it cannot be cancelled.

What are the cases when e-way bill is not required?

An e-way bill will act as an effective tool to check on tax evasion at various points and to track the movement of goods. But when it is not required to be generated, the transporter has to ensure that a copy of tax invoice or a bill of supply prepared according to the provisions of Law is carried.

Below are the cases when the generation of e-Way Bill is not a requirement:

So, if a taxpayer falls under any of the above categories, he will not be required to generate an e-Way bill. Though the taxpayers who fall under e-way bill exemptions are relieved of this compliance, they should ensure that the other documents like the invoice and bill of supply are in accordance with the rules and regulations. 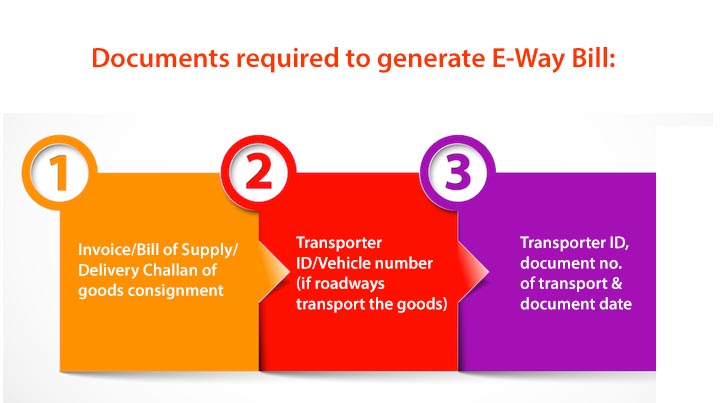 What are the documents or details required to generate e-way bill?

You need the below documents to generate the e-Way Bill:

Consequences of not carrying E-way bill

The consequences of not generating & carrying the E-Way bill can result in both monetary and non-monetary losses to the taxpayer.

Moving goods without the cover of an invoice and e-way bill constitutes an offence and attracts a penalty of Rs.10,000 or the tax sought to be evaded (whichever is greater). Hence, the bare minimum penalty that is levied for not complying with the rules is Rs. 10,000.

Another consequence is that if the vehicle is found to be transporting the goods without an e-way bill, it can be detained or seized and would be released only on payment of appropriate tax and penalty as specified by the officer. Under this, there could be two situations:

Apart from the legal consequences mentioned above, it is also important to note that the vehicle as well as the goods of the taxpayer can be detained.

TDS on Advertisement under the Income Tax Act

TDS on advertisement is deducted under section 194C and 194J of the Income Tax Act. Know the scope and meaning of advertising and advertising contracts in India.
Antim Amlan
27-Aug-19
108,888 views

Know about HSN code for GST, its classification and why HSN and SAC codes are necessary to follow. Learn how to find a product in HSN list and its relevant HSN code.
Antim Amlan
27-Aug-19
10,983 views