Polygamy legal or not, varies country to country. Like for Hindus it is prohibited with exceptions. So where is polygamy legal in India? Well, the legal status of polygamy under Muslim marriage, tribals and even Goan residents is permitted. Goans are allowed to practice bigamy, which is a form of polygamy. Legal in India or not, depends a lot on the Indian law and the personal laws. Same phenomenon applies for other places where polygamy is legal. So, read our blog and understand about polygamy.
Written by:
Antim Amlan
281,052
Published on
28-Sep-19

Before discussing whether polygamy is legal in India or not, one needs to first understand the meaning of 'polygamy'.

The Oxford Dictionary describes polygamy as the practice or custom of having more than one wife or husband at the same time.

According to the Merriam-Webster Dictionary,

"Polygamy is a marriage in which a spouse of either sex may have more than one mate at the same time."

The custom of practising polygamy has been prevailing in society for a long time. But as of today, polygamy in India is outlawed.

Historical Aspect of Polygamy in India

Even Indian history is full of such examples where emperors and kings were in practice of polygamy and had several wives. Such examples of polygamy are also present in religious texts and scriptures.

In ancient India, there was a time when there was no prohibition on polygamy. It was, in fact, a common practice among aristocrats and emperors.

In most of the countries, polygamy was in practice.

While polygamy was in prohibition after Section 494 and 495 of the Indian Penal Code of 1860 came into effect.

Also, later in 1955, the prohibition of polygamy came into being. Whence the Hindu Marriage Act was drafted. It specifically criminalized Hindus to marry twice, especially if the spouse is still living. However, there were exceptions for tribals and Goa residents.

Till recently when adultery was quashed from IPC and made a ground for divorce only.

Therefore, making polygamy illegal in India in 1956 uniformly for all of its citizens. Except for Muslims and for Hindus in Goa.

However, even today, in what states is polygamy legal depends a lot on the laws of that country.

In case, you are looking into polygamy in India, legal aspects can be better understood after you consult a lawyer.

And we at MyAdvo provide you with the option to find a lawyer online. Someone who can clear all your misconceptions on whether or not is polygamy legal in India. We have already discussed what the meaning of polygamy is and what the position of such practice in society was.

In the old days, polygamy was very much a part of society and had no legal binding. People used to practice polygamy freely.

The laws prevailing at that time were not harsh or strict with respect to polygamy. Thus, people used to practice polygamy without any fear of punishment.

However, in India, the position of polygamy is still vague.

The punishment specified in articles 494 and 495 is applicable. However, it is rare if the first spouse does not have an objection.

"So, can a man marry two wives legally in India?"

No. A man cannot marry two people or have two wives in India. But the picture is a little different for Muslims under their personal laws.

As Muslims have permission to have four wives, while bigamy is legal in Goa and along the western coast.

Though a Hindu has been prohibited from marrying twice, however, the Muslims are not barred till now. They don't have any such law suggesting to stop practising polygamy.

A Muslim can keep four wives at the same time but we will discuss in detail later in this article.

Under Indian law, a person cannot marry or keep two wives at the same time. Such practice is illegal and liable to punishment.

Thus, there cannot be a specific one definite answer to whether polygamy legal in India or not.

For example: If a Muslim person marries in Goa or the marriage is registered in Goa, then he cannot polygamy or keep more than one spouse at the same time.

So if a Muslim male thinks polygamy is legal in Goa, then he is wrong.

If the Indian law will ever legalize polygamy, women in India are going to face a very tough and difficult time. You might be wondering- is polygamy legal for a Hindu?

The answer to this question is not that simple.

In India, both Indian law and a person's personal law, that is, religion binds the person. So a Hindu or a person who practices Hinduism follows the practices as suggested to him/her by the religion.

In ancient India, there was a time when the Indian law was not that prevalent or rigid. So, at that time, a person under the Hindu custom had the permission to practice polygamy.

In those days, the husband could marry more than one person and have two, or more than two wives.

But with the progressing time, and introduction of the Hindu Marriage Act, the practice of polygamy has been abolished. Today it is illegal in India amongst Hindus.

As for a Hindu or a person who practices Hinduism, polygamy is both prohibited and illegal. Both under the Indian Law and as per the Hindu Marriage Act.

Now, it's illegal for a Hindu to marry more than one person or keeping two spouses at the same time.

In the present scenario if someone asks you - is polygamy legal in Hinduism - the answer is NO.

If he/she does so, then the second marriage will be considered illegal. And the first spouse can file a case against the spouse committing polygamy under the Hindu Marriage Act.

The Hindu Marriage Act is a codified law which prohibits a Hindu from practising polygamy.

Polygamy in India and Islam

We have already established two facts. One is the Indian law and the other is the personal law, meaning, the religion which binds an Indian.

In Hinduism, polygamy is prohibited and illegal under the codified personal laws. But in Muslim law, the picture is different.

A female Muslim cannot marry more than one person. She cannot have more than one spouse. This shows the legal status of polygamy under Muslim marriage. Many Muslims women have raised their voice against the practice of polygamy.

They have voiced legal arguments against polygamy in Islam. There are even books today that elaborate and show the plight of Muslim women who have been prey to the practice of polygamy. 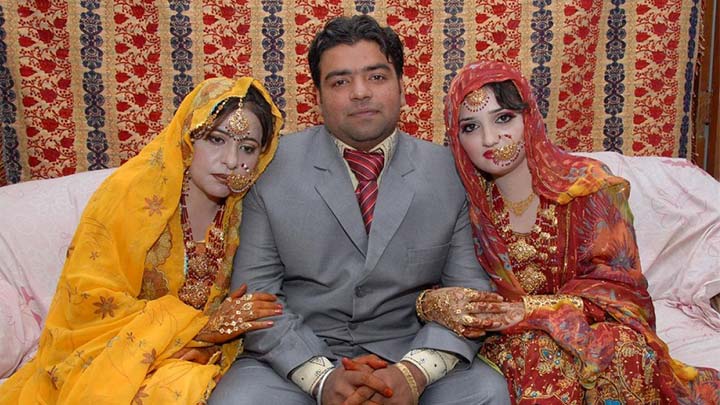 The practice of polygamy is quite prevalent under Muslim personal law. A Muslim male person can marry more than one female but only under their personal laws.

Many Muslim women to curb the practice of polygamy have taken help of the Special Marriage Act.

Under this Act, even a Muslim can marry only to one person. He cannot have more than one spouse.

The practice of polygamy under Muslim personal law is not punishable. It is a part of the social custom which people have been following for centuries after centuries.

So from the above discussion, it is clear that polygamy is still very much in practice in some places.

It is very difficult to calculate in how many countries is polygamy legal because the practice of polygamy is still followed in many places even though it is considered as illegal by the laws of such country.

In which country polygamy is legal?

There are many places and states where polygamy is still in practice. Having more than one spouse is not illegal and does not attract penalty or punishment.

Most of these laws and practice are in Muslim countries due to their personal law. Their custom and personal law are keeping the practice of polygamy still valid and legal.

The practice of polygamy is a curse to Muslim women. In this scenario, they had no right to say against the husband even if he marries the second time. That too without giving divorce to the first wife.

But the same rule of polygamy is not applicable to Muslim female, as a Muslim female cannot practice polygamy.

If a Muslim female has more than one husband, then she is liable for punishment. As per the Muslim personal laws, she will have to go on trial for practising polygamy.

Therefore, we can see that in a single religion, the laws of polygamy depend on the gender of the person.

The practice of polygamy is not a desirable option. There are various cons of practising polygamy. The polygamy practice will bring chaos into society and there will be no specific law to regularise this practice.

A bold move is that all the laws governing such practice come under a single codified law. This will hence be applicable on all Indians. Who to Ask for Help?

Just ask legal advice to deal with Polygamy from any good lawyer near you. As we at MyAdvo have the best set of legal minds onboard with us.

With MyAdvo you get access to connect with many good lawyers who are experts in their field of work.

MyAdvo acts like a legal concierge. All you have to do is just select one that matches your criteria.

We provide you with a directory of lawyers near you, who have attained great expertise in their respective legal domains.

Send us your query via mail on support@myadvo.in or simply call us at +91-9811782573 to resolve any and every kind of legal problems.

How to Update Marriage Certificate