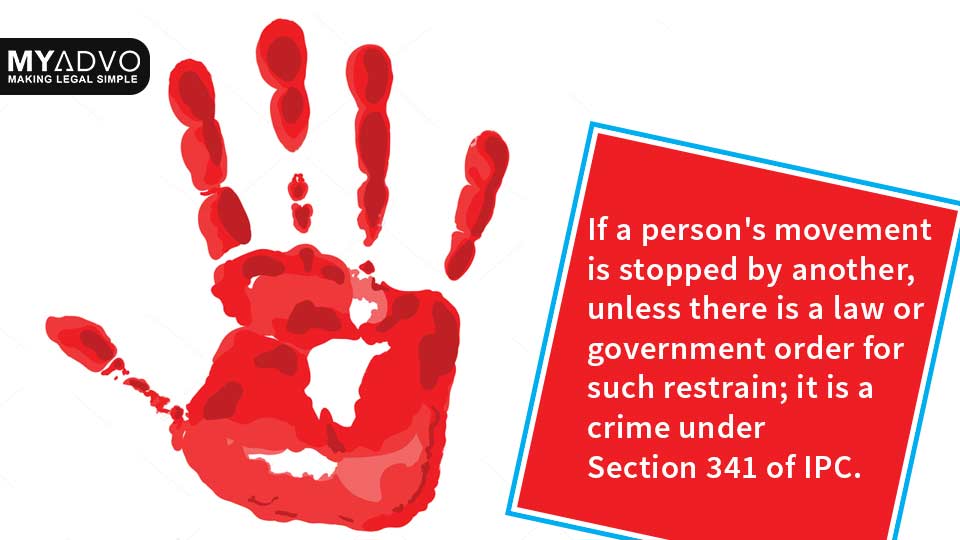 Section 341 IPC deals with the provisions of punishment for wrongfully restraining a person from moving to a place or direction, where he has a right to go.

For the purpose of this section, firstly, it is to be understood what does the term ‘Wrongful Restraint’ means. The offence of Wrongful restraint is defined under section 339 of IPC.
Wrongful Restraint in simple term means, obstructing or preventing a man from moving one place to another, where he has the right to be and wants to go.

Here, the wrongful intention of a person to commit a particular offence is not the not a necessary element. Restraint simply means an abridgement of the liberty of a person against his will.
Say for an instance, a person deprived of his will, to movement by sleep will not be subject to restraint.

The major objective behind implementing such a provision was, the Constitution of India confers the right to freedom of movement of every person freely throughout the territory of India. Where on the same hand Articles 19 and Article 21 provides as well as guarantees every citizen of India with the right of personal liberty.
Like the two sides of the same coin, liberty is not absolute. It can be curtailed, abridged or can be restricted in the interest of the public, by following the procedure established by the law.

Here, the remedy against an individual’s act of abridgement of another’s right to movement lies under the criminal law by lodging a complaint against the accused before a Magistrate for wrongful restraint, depending upon the nature of the act committed.
The act committed will not attract the writ of Habeas Corpus under Article 32 or 226 of the Indian Constitution.

To safeguard the interest of the individual’s right to liberty against deprivation by an individual or groups, the Indian Penal Code made wrongful restraint punishable under IPC section 341 of the Code.

The necessary element that contemplates in Section 341 of the Indian Penal Code is that there must be an obstruction directly attributed by the person charged. The obstructor must intend, or know, or have reason to believe that the act or directions given by him would cause obstruction or restrain a person from moving.

To hold a person guilty for committing the offence of wrongful restraint, the obstruction caused must be:

In the cases of wrongful restraint, there need be no stoppage of movement. It may also be in terms of particular directions as well. The act committed must have been done with intention of stopping a person from moving in a particular place or direction.

Also, the physical presence and physical appearance of the obstructor is not necessary, mere threats and other ways can also restraint a person from moving to a particular direction.
Majorly, the offence is determined by the effect caused and not by the nature of the act committed.

For a better understanding of Sec 341 Indian Penal Code, we can take the example as-

Further, there is an exception provided for the purpose of Wrongful Restraint. “The obstruction of a private way over land or water which a person in good faith believes himself to have a lawful right to obstruct is not an offence within the meaning of section 339 IPC.

Hence, if the obstruction is made in good faith and the accused believes that he has a legal right to obstruct the person, he commits no offence.
But, a person cannot be said to have been wrongfully restrained, if he has no right to proceed in any particular direction.

“In the case of Vijya Kumari v. S.M. Rao, the Supreme Court held that the complainant, a teacher licensee of a room in a hostel has no right to live there after the expiry of the term of licence, and hence cannot claim to be in the room and any obstruction will not amount to wrongful restraint.”

Wrongful Restraint is a Cognizable and bailable offence. Any person, who wrongfully restrains the way of another person shall be liable to punishment under IPC 341 with simple imprisonment for 1 month, or with fine of Rs. 500 or with both.
These offences are triable by any Magistrate.